A "Good Sam" Experience Left us Feeling Anything But Good

Things that can mess up your RVing day: Motoring down the happy highway when a sudden "BOOM!" rolls out across the landscape. A quick glance in your rear view mirror reveals chunks of rubber blasting away from your trailer wheel well. Sure enough, you get to test out your emergency road service. 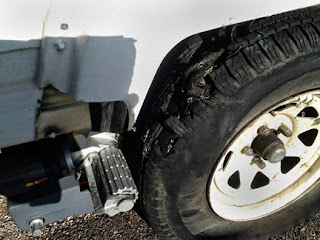 Not too long ago, running that lonely stretch of Highway 95 between Quartzsite and Yuma, Arizona, that was my experience. I'd just gotten the rig back from a mechanic who'd worked on the suspension system, and I was running home to Quartzsite, late for supper. The street-side forward tire, not more than two or three years old, decided it was time to head off to the great "tire beyond."

After limping onto a wide spot on the shoulder and setting out the safety cones to warn traffic, I texted my beloved to tell her not to hold dinner. Then I rang up the dispatch folks at Good Sam Emergency Road Service, looking forward to a short wait for a service truck to help me out of my predicament. Little did I realize that it would be a long time until I finally fired up the engine and headed for home.

We've had Good Sam service for a number of years. We've had a few adventures that required phoning in and waiting for a service guy. Sometimes we waited in a parking lot; once beside a very scary stretch of Utah's Interstate 15 with traffic blasting past us like astronauts hell-bent for the moon. But this experience left me wondering: Is there something better?

I can understand that the outfit will have a central dispatch center somewhere. Texas isn't as far from Arizona as say, New York City, but as far as "local knowledge," the dispatcher may has well have been on the moon. It took nearly a half-hour of concerted effort to help the dispatcher find where we were. At first she had us spotted somewhere in California, then later, I "was" way north of where I really was. Happily, I had a GPS that would display my geographic coordinates, which I rattled off to her. "Oh, my system has located you now," she told me. Future reference: Know how to get your own GPS to give coordinates, it could save you a lot of frustration.

Now knowing where I and the broke down rig are located is one thing, it's quite another to find the nearest service provider. My dispatcher cheerfully told me she'd get back to me shortly to let me know who was coming, and when to expect them. Nearly an hour later, I called Good Sam back. Point number two: Terminology. When you get the cheerful soul on the phone, after the first call, immediately tell them: "This is a recall" or you can expect to go through a long ritual of giving all the same information you already gave.

The second fellow on the line seemed a bit put-out that I had yet to hear back. He put me on protracted hold. Now mind you, I hadn't planned on being stranded beside the road – whoever does? So of course, I hadn't brought a charge cable for my cell phone. Worried that I might run out of battery before a rescue arrived, I finally hung up after 10 minutes on hold. Happily the second dispatcher did eventually call me back. His sad story: My original dispatcher was still working the phones, and she'd asked for "a different database," of providers to call. A supervisor soon got involved. 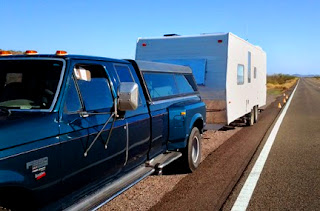 An hour and a half after my initial phone-in, I got the happy news: They'd called 21 different service providers, and the first 20 turned down the job. Good news: Number 21 would accept the job. Bad news: It could be a three-hour wait before they arrived. Given the name of the provider and their phone number, I settled in to watch the sunset. Worried, however, because it appeared that my trailer tail lights weren't working. I called for reinforcements, and my dearest one arrived with a car to provide lights, and hamburgers and french fries to provide nourishment.

After a long wait I dialed up the service provider. He was happy that I had – because there was some confusion as to exactly where I was. Somehow the dispatcher – despite having geographic coordinates, and the fact that their, "system has located you," the tow guy figured I was somehow way north of reality. And that three hour estimate? "No, we told them it might be four hours before we can get to you – I'm swamped at the shop and I'm having to call in backup."

After one hamburger, numerous french fries, and several hands of pinochle, the service guy arrived. I won't go into detail about how the spare tire rim froze up on the wheel, so that the poor guy had to remove the tire and remount it on a different rim, but I will tell you that the gentleman could tell me in years, months, and days how long it was until his retirement.

I'm happy we finally got away from that lonesome spot beside the highway. But it does leave me with a lot of questions. First, it seems there has to be a better way to "find" stranded motorists. This isn't the first time we've had to hand-hold road service dispatchers. Second, why is it that it took 21 phone calls to find a cooperative road service provider? Is it because Good Sam pays so little to their contractors that a 35 mile drive from Quartzsite just isn't worth the time? If that's the case, it seems like a disservice, not only to the service providers, but especially to the "members" who pay good money to depend on help when needed.

This great book shows how!