Near disaster -- from an uncommon cause. Could you be next?

A small plaque at the entrance to Puopolo Park, placed by the Bostonian Society, commemorates the "Boston Molasses Flood." It reads: "On January 15, 1919, a molasses tank at 529 Commercial Street exploded under pressure, killing 21 people. A 40-foot wave of molasses buckled the elevated railroad tracks, crushed buildings and inundated the neighborhood." 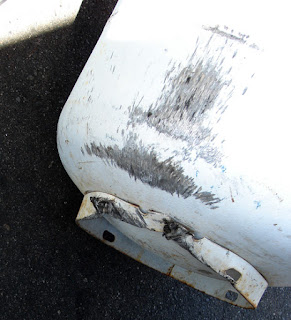 While that disaster was spectacular, the other day we narrowly avoided a disaster of our own – from a directly related cause. The molasses tank, which may have contained up to 2,300,000 gallons of molasses, is said to have given way due to metal fatigue. We had a tank of our own, "jump overboard" and drag along California Highway 99, held in place by a rubber gas line. Metal fatigue caused a weld in our LP cylinder support system to give way, tossing the full cylinder onto the pavement, where it dragged along at 50 miles an hour, merrily shedding steel where it grated the pavement. Had we not heard a "ding, ding, ding" noise and stopped, we probably wouldn't be here to tell the tale. LP gas and sparks aren't a good mix. 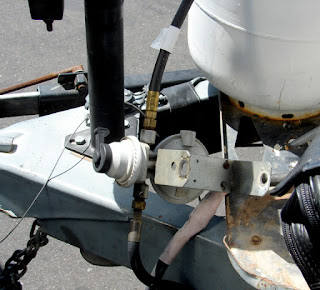 Metal fatigue, simply stated, is a weakening of metal by repeatedly applied loads. In our case, a half-inch metal rod had been welded onto the bottom support platform of our LP cylinder carrier. That threaded rod was home to a clamp that when secured to the top of the cylinders, kept them in place. But bouncing down the road repeatedly stressed the weld where the rod came in contact with the platform. The potholes and pavement irregularities of the highway near Fresno were enough to fatigue the weld to the giveaway point, and the rest is history that could have been much worse than a three-hour delay and repair effort.

We've had other experience with metal fatigue in our RV career – and you may have as well. If you have a travel trailer or fifth wheel, you've got several spring shackles, a critical component in your RV's suspension system. In fact, any rig with a leaf spring has spring shackles. Repeatedly jostled and strained by bouncing down the road, spring shackles can give way, with consequences ranging from minor to catastrophic.

Metal fatigue isn't limited to support systems and LP platforms. Ever had a window crank break off? Yeah, maybe they are "cheap junk" but it's just another example of fatigue. In that case, it's largely a nuisance. But for areas where limb or life is involved, the matter is far greater than just a nuisance. It simply underscores the point of regularly inspecting your RV, or having it done. An annual look-see of all suspension system parts is a good idea. If you don't know what you're looking for, hire it done. Would we have thought to look at the propane support platform. Never. But maybe if we'd crawled under the rig with an eye toward "what could be out of order" we might have spotted the problem before it nearly got away from us. Crawling around under the rig would also give a chance to inspecting the welds on the trailer frame. Happily, its a rare day when you hear of something like a frame coming apart, but hey, for my peace of mind, it's worth a few hours of inspection.

This great book shows how!